Since April, Rommen [an elderly citizen of Tilburg] has been able to cross the road without dodging cars – with END_OF_DOCUMENT_TOKEN_TO_BE_REPLACED Since April, Rommen [an elderly citizen of Tilburg] has been able to cross the road without dodging cars – with the help of his smartphone. He is one of 10 people in the Dutch city of Tilburg trialling the Crosswalk, an app that gives pedestrians with restricted mobility extra crossing time.

A sensor in the lights constantly scans the pavement on either side of the junction, and if it “sees” Rommen waiting when the button is pressed it adjusts the green-light time. The app comes pre-installed with one of four time settings, depending on the user’s level of mobility, to minimise delays to other traffic.

Dynniq, the Dutch company that develops intelligent traffic systems and is helping the city council with the trial, explains the app works in combination with GPS and the software that operates the traffic lights, so there is no need to install extra devices.

The company is also developing a spin-off for cyclists, the CrossCycle, which will sense when bikes are approaching a junction and change the lights sooner. Another version detects visually impaired pedestrians and activates the ticking sounds that tell them whether the light is red or green.

The pilot project is part of a 25-year plan to make Tilburg’s road network more pedestrian and cycle-friendly. “We want to do more with smart mobility and use technology rather than just putting down more asphalt,” says Mark Clijsen, urban planning specialist at the city council (https://www.tilburg.nl/).

Tilburg’s long-term mobility strategy, which runs up to 2040, aims to redress the balance in traffic and encourage people to walk or cycle. “For a long time pedestrians have been the neglected kids in traffic who get relatively little time on green,” says Clijsen. “What we want is to give the pedestrians more priority so the cars will have to cross from one side of the city centre to the other. It’s about thinking differently.”

The pilot is due to be assessed in the autumn, and if successful, Clijsen estimates that the traffic lights could be converted at a rate of around one every two weeks. There are still teething problems to iron out: the crossing Rommen uses is right next to a 16-storey block of flats, which makes it hard to pick up a GPS signal. 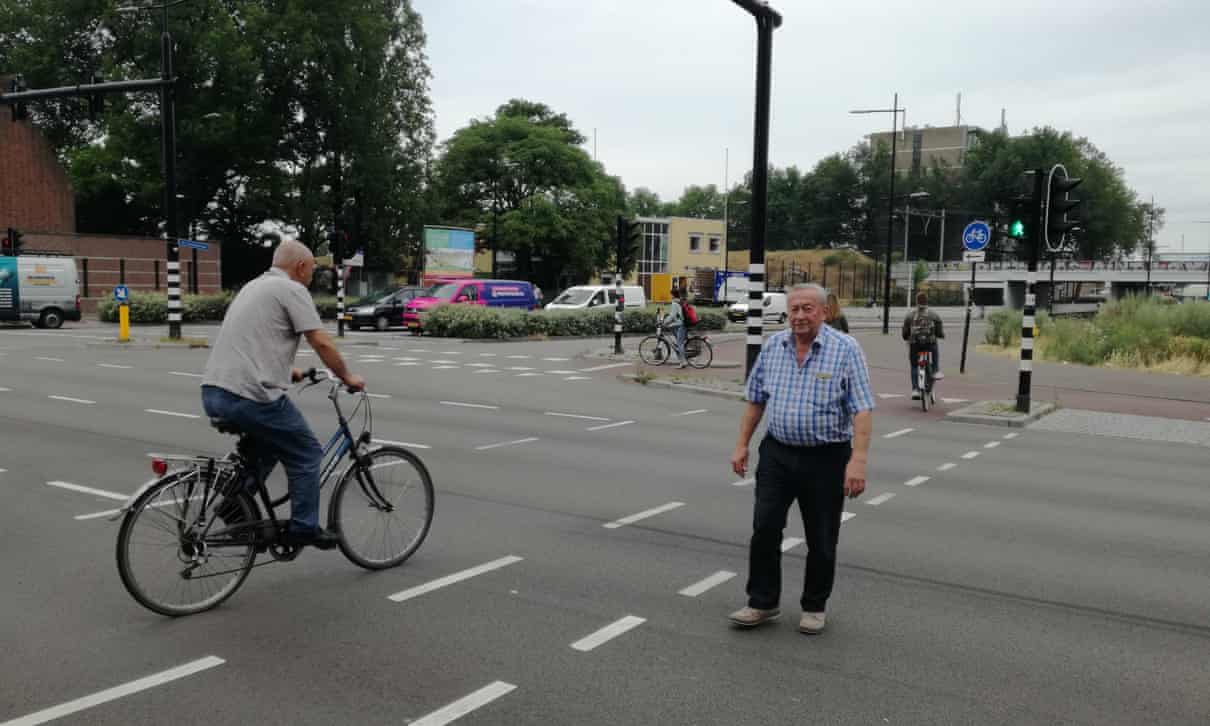 Noud Rommen: ‘When it works it’s excellent. There are a lot of older people in my block. This means they can cross safely’. Photograph: Gordon Darroch for the Guardian

“In Tilburg, one of the main challenges in developing the Crosswalk app was finding people to test it”, says Clijsen. Most potential users are elderly and often wary of relying on unfamiliar technology.

“We had to approach them one-on-one and show them how the app worked on their phones. Once we did that they were keen to get involved, but the barrier was very high. We held a presentation and put an advert in a local newspaper with a circulation of 2,000 and 10 people came forward.”

Join GuiDanCe webinar on ‘Gamification, a driver for sustainable behaviour change in cities?’

END_OF_DOCUMENT_TOKEN_TO_BE_REPLACED

‘Gamification’ indicates “the application of game-design elements and game principles in non-game contexts”. It involves using elements such as badges and rewards, challenges and leader-boards as well as the ability to ‘level-up’ and/or use an avatar.

Objectives range from raising awareness to motivating users to change their behaviours or engaging them to play a more active role in their environment.

This webinar will present three EU-funded projects using game features to support a shift in urban behaviours towards more sustainable and liveable cities.

hackAIR is developing an open technology platform for ‘citizen observatories’ on air quality. The project aims to raise collective awareness about the daily levels of human exposure to air pollution, an environmental issue with serious health and lifespan implications. Community-driven data sources are expected to complement official data.

A citizen engagement strategy is being developed by VUB, the research partner, including co-creation workshops from the early stages. EMPOWER aims to reduce use of conventionally fuelled vehicles (CFV) in cities by fundamentally changing people’s mobility behaviour. Citizens are encouraged to use more sustainable modes of transport through personalised positive incentives made available via a smartphone app.

Implementation of EMPOWER in the city of Enschede is part of a broader attempt to stimulate cycling.

Three pilot-sites are testing the app: the Catalan Energy Institute (ICAEN) in Barcelona, the General Secretariat of the Municipality of Athens and  the Musée National d’Histoire et d’Art (MNHA) of Luxembourg.